Dr Charlotte Holland, Director of RCE Dublin, was recently appointed to the T20 Think Tank, the global research and policy advice group which advises leaders of the G20 (the international forum for the governments and central bank governors from the European Union and 19 countries, including: United States, Japan, China, Saudi Arabia and Russia). Collectively, the G20 represents more than 80 percent of the world’s economic output and over 60 per cent of its people. The thrust of the world’s leading think tank is to drive policy innovation to help G20 Leaders address pressing global challenges and seek sustainable, inclusive and resilient societies. 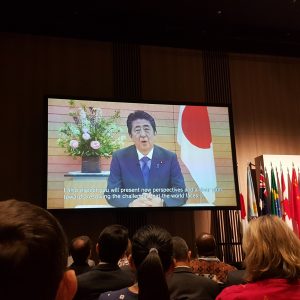 At the T20 meeting in Tokyo in May 2019, Dr. Holland engaged with Task Force 7: The Future of Work and Education for the Digital Age, which is setting out the policy actions needed to harness the opportunities of technological transformations, such as: artificial intelligence, fintech (financial technologies) and the Internet of Things, while ensuring that benefits can be shared by all.  It also aims to provide policy advice to develop educational systems that promote equal opportunities, lifelong learning, and financial literacy. Task Force 7 thus centres on exploring new tracks for the global economy, and makes specific recommendations on how to achieve well balanced labour markets while reducing inequalities and promoting economic and social development.  With respect to the latter, Dr. Holland reported concerns around the possible erosion of employee rights for those hired within the platform or ‘gig’ economy (estimated presently to be in the region of 162 million people in the United States and Europe), where workers typically have fixed term contracts for mainly online work with a lack of long-term commitment from workers and organisations.  Dr. Holland will report further on policy advisements to support and protect these and other workers following the next series of T20 meetings in Saudi Arabia, which takes over the Presidency of the G20 from Japan in January 2020.

Any cookies that may not be particularly necessary for the website to function and is used specifically to collect user personal data via analytics, ads, other embedded contents are termed as non-necessary cookies. It is mandatory to procure user consent prior to running these cookies on your website.