Dublin In The Coming Times

The Dublin In The Coming Times (DICT) project (2015-2018) aimed to raise awareness of sustainability issues through a programme of creative writing workshops and accompanying publications. The project was led by Fighting Words, with other RCE Dublin members (such as DCU) partnering in the design and evaluation of the enterprise. The citizens of Dublin were invited to reimagine their own city and what it might look like in the future in a series of workshops between January 2016 to June 2018, with the project reaching over 1,000 adults and 2,500 children and teenagers, with close to 200 volunteers involved during that period. To open the project, the Irish Times ran a series of pieces – nine in total – by professional writers, their work reimagining the city of Dublin in the future.  The series, collated by Roddy Doyle, includes contributions from Sebastian Barry, Aoife Dooley, Christine Dwyer Hickey, Belinda McKeon, Paul Murray, Paula Meehan, Harry Clifton, Enda Walsh and Louise O’Neill. These pieces not only brought the project and its aims to a wider audience, encouraging the readership of the Irish Times to consider the future of Dublin, they were also used within workshop settings. The pieces were read and discussed by the participants, who considered the style and content of the work. This formed a basis for beginning the discussions around the theme in question. 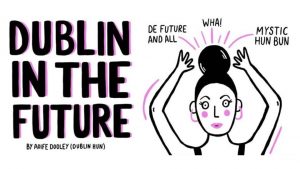 Submissions from the various workshops were published on the project website, hosted by Dublin UNESCO City of Literature. Furthermore, a book, ‘Dublin in the Coming Times,’ was published and launched in November 2017, and made available in public libraries around Dublin city. There were also dedicated evenings for the various writing groups to come together and read their work, alongside established writers. Other events included a comics reading/performance at Fighting Words by Stray Lines Comics Collective, a play reading with professional actors reading the work created by Transition Year students from Coláiste Mhuire, Cabra, and an evening of readings organised by the Ballyfermot writers group as part of the Dublin International Festival of Literature. This project has now moved to its next phase which is centred on capturing and sharing of oral histories from Dublin’s docklands – read more about this under the active project: Stories of Dublin Docks and Dockers.